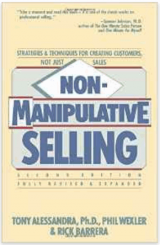 Non-Manipulative Selling, from Wexler, Barrea and Alessandra, is a great overall book that includes some theory and a lot of tactical selling advice. It offers an overall emphasis on understanding behavioral styles.

The goal of the book is help the reader learn to sell with flexibility by adjusting to each prospect’s style. The six-step selling process described by the authors is particularly useful.

With its details on behavior styles, Non-Manipulative Selling will be beneficial for those involved in complex and transactional sales.

This book is very congruent with an ethical selling philosophy and principles.

Non-Manipulative Selling is a practical book, oriented toward the process of selling. The authors offer instruction on practice with every idea they present.

The emphasis on practicality is not surprising when you consider that the book originated in 1975 as a seminar workbook. The authors note in the Preface that since the original publication, many others have written, spoken, and taught about non-manipulative selling. They feel, however, that most of those are trotting out a non-manipulative philosophy as a surface over the traditional sales hard sell approach.

The book begins with five chapters that explore the skills a salesperson brings to his or her craft. With chapter titles like “Relationship Strategies” and “The Power of Listening, Observing, and Feedback,” these chapters address the techniques required for non-manipulative selling.

The authors then present six chapters on the sales process itself. These chapters cover subjects ranging from meeting the prospect to assuring customer satisfaction.

The book concludes with four chapters on general sales skills, including chapters on “Selling by Style” and “Developing Self-Management Skills.”

First we’ll take a look at the authors’ view of non-manipulative selling compared to traditional selling. Then we’ll review examples from three chapters of the book.

The authors target three problems with training in traditional techniques: “not enough training, too much product training and inappropriate sales training.”

Non-manipulative selling puts the emphasis on planning, meeting, and studying, the early steps in the sales process. This approach leads to a greater understanding of the customer’s needs.

Here are some of the distinctions the authors draw between traditional and non-manipulative sales:

Overall, non-manipulative selling has many positive results, but the one that stands out is this…[Please click to learn how to get the rest of this sales book review and much more.]