Influence, The Psychology of Persuasion 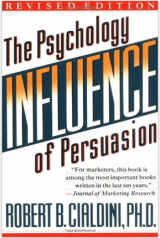 Influence, The Psychology of Persuasion

Introduction – Influence: The Psychology of Persuasion

Have you ever bought something you really didn’t need and then wonder why? How about the boxes of candy or cookies you buy from the neighbors’ kids even though you’re on a diet or don’t really have a sweet tooth? Just what are the underlying factors that cause us to say “yes” to another person? In his book, Influence, Dr. Robert Cialdini identifies and explains these factors or “weapons of influence” that dictate our course of action – oftentimes without any conscious direction.

Summary – Influence: The Psychology of Persuasion

Dr. Cialdini identifies six “weapons” or overall categories that contain specific “compliance” tactics. Each tactic is empowered and governed by a fundamental psychological principle that directs human behavior. According to the author, many of these tactics are “used” on us daily without us even knowing.

Each of the fundamental principles are discussed in detail, as well as their ability to produce a distinct kind of automatic, mindless compliance from people – a willingness to say yes without hesitation. The argument is made that as the world around us becomes more and more fast-paced and we experience increasing information overload, this particular form of “unthinking compliance” will be more and more prevalent in the future.

A research study provides a good example of this type of “unthinking compliance” which the book reviews. In this study, a researcher asks the subject if she can cut in line to make copies. In each of three scenarios, she says something slightly different with surprising results:

Apparently, the reason (“I’m in a rush”) had virtually no impact on the subject letting her cut in line. Rather it was the use of the word “because” that triggered an automatic response in the subject.

The rule of Reciprocation states that we should try to repay, in kind, what another person has provided us. We feel obligated to repay the individual for favors, gifts, invitations, etc.

A professor sent Christmas cards to a sample of perfect strangers. The end result? He received a large quantity of holiday cards addressed to him from these people that he had never met!

Commitment and Consistency work together to form another very strong principle. Humans are nearly obsessive in their desire to be (and appear to others) consistent with what we have already done. “Once we have made a choice or taken a stand, we will encounter personal and interpersonal pressures to behave consistently with that commitment.” Once a stand is taken, then, there is a strong, natural “pull” for us to behave stubbornly consistent with the stand.

Two researchers conducted a study on a beach. One researcher was the “victim” and the other the “thief.” Both scenarios were conducted on twenty random subjects along the beach. In the first scenario, the “victim” placed his blanket five feet from the subject. After a few minutes, he would stand up and go for a walk down the beach, leaving his belongings behind. A few minutes later, the second researcher, the “thief,” would approach the blanket, grab a radio from the absent researchers blanket and try to hurry away with it. Under normal conditions, subjects were reluctant to challenge or stop the thief – only four people of the twenty times the theft was staged. In the second scenario, the results were much different. …[Please click to learn how to get the rest of this sales book review and much more.]